Just take the burg- oh it fell on the ground…

Make The Burger is a pretty straightforward title. You own a fast food truck that focuses on making burgers. Pretty much thrown into it, you start with only the few basic ingredients and one table for your customers to sit, wait, and eat. Customers will occasionally sit at your table(s) asking for a burger (indicated by the burger icon in a speech bubble). Once you click on them, you’ll get a little order ticket that will show you what they want on their burger indicated by icons and how much time you have left until they leave. Of course, those that you haven’t taken orders from will also leave after a while.

You don’t have to make the burgers, but only put the toppings. As you go into your truck, you may notice that tickets don’t carry over to your burger making station. This aspect makes it a memory game and thus harder than it would normally be. You’ll need to try and memorize what’s on the ticket, pick out the ingredients, and send it out. Thankfully, if you put on the wrong ingredient, you can take it off and put the right one one before you complete it. Once that’s done, you’ll be taken back outside and you’ll need to drag the burger to the waiting customer (so lazy won’t even come to get their order tsk tsk). This also comes with a slight complication where you can actually drop the burger on the ground.

While other games will use currency, this deals in your customers Happiness. At first, it was pretty confusing as points to buy ingredients lowered until I figured it out. As you’re delivering correct burger orders, Happiness will increase based on the ingredients they asked for, while it decreases if customers leave in a huff or given the wrong order (which will explain your points going down despite not buying anything). The Happiness you build up will then be used to buy more ingredients or even another table to serve more customers at the end of the day. Of course, this decreases Happiness and requiring you to try to regain it back before it completely depletes. I had problems with two tables, which determined my downfall, so I can only imagine how it is with five.

The ingredients you’ll be buying does increase Happiness more than the basic ones, but it will also make it more complicated on you. Requiring you to remember the icons for more ingredients as well as the category (which I did find it helpful in remembering orders). Not to mention adding more tables will just make it way harder as more customers are coming in. And more customers mean more tickets and more impatient customers that will most likely walk out on you before you get the chance to make their burger. Though, the game does progressively get harder on its own. You only start at putting a maximum of three ingredients on burgers, but that increases after a certain day (or maybe customer?) milestone is hit. Giving you more to remember and more shops to buy better bread, meat, and mystery ingredients that you can only visit during working hours.

Your run ends if the Happiness of your customers goes all the way down. Which, I suspect, means that no one comes to your food truck anymore. 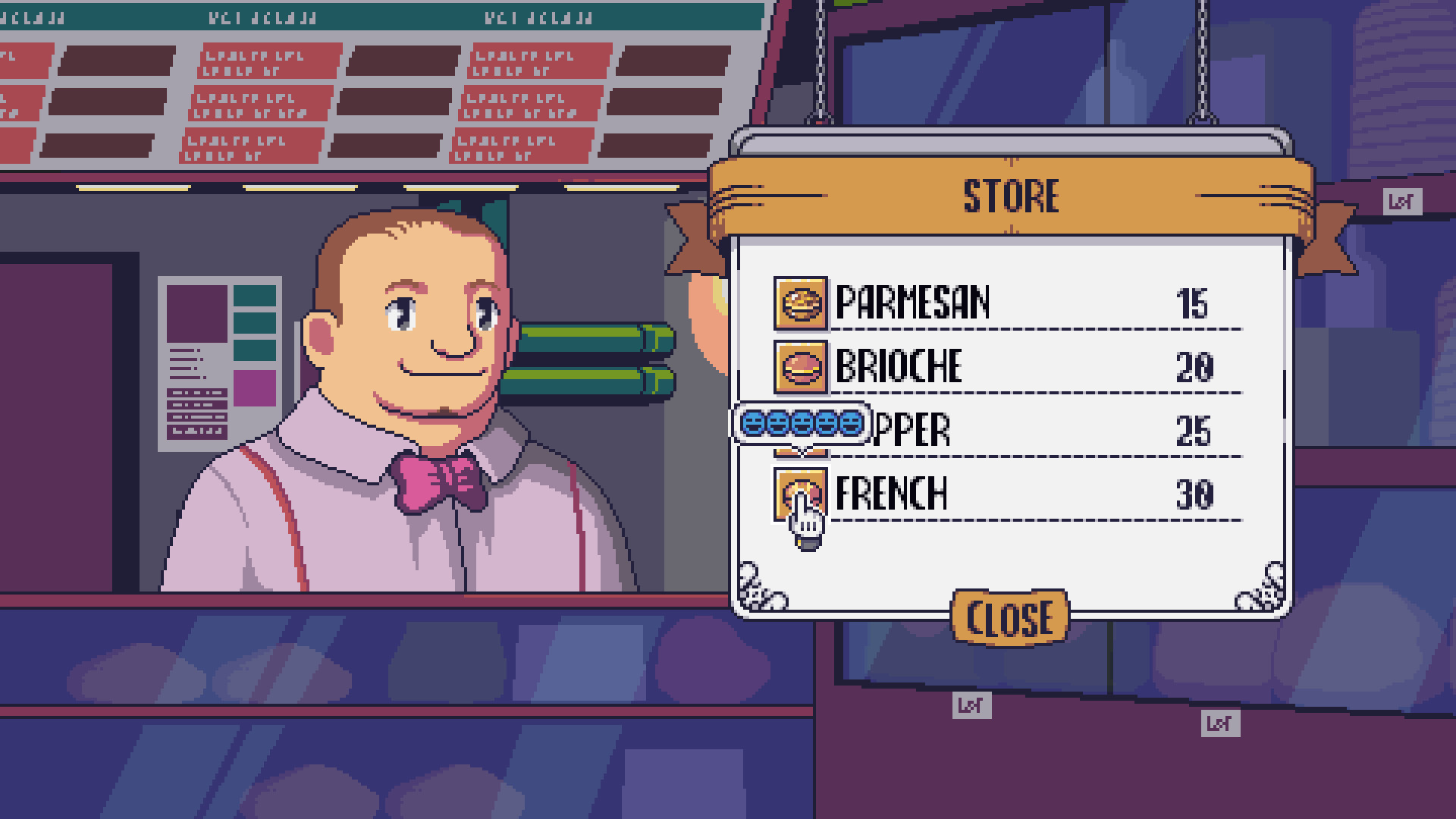 Despite it being obvious that Make The Burger is meant to be a straightforward time management memory game, I do think there could be some improvements made. Since the game puts you right into it, I really wished the first day was used as a tutorial to ease you in. Showing you how you’ll be taking orders, how the orders will hide after over half of the time is gone, your run will run out if Happiness does, and that the currency you’re using is Happiness. This can be implemented either by having a separate option in the menu or the game could automatically skip it if it detects that you already played through it (with possibly the option to uncheck it if you need a refresher). Perhaps even a casual mode that gives you more time as well as an option to look at tickets at your burger making station (for those that don’t want to do a memory game at the moment); a way to ease up timers especially as you get more tables; and a key to quickly switch between the outside and inside of your food truck. Other than that, the only bug I ran into was that the music cut out. 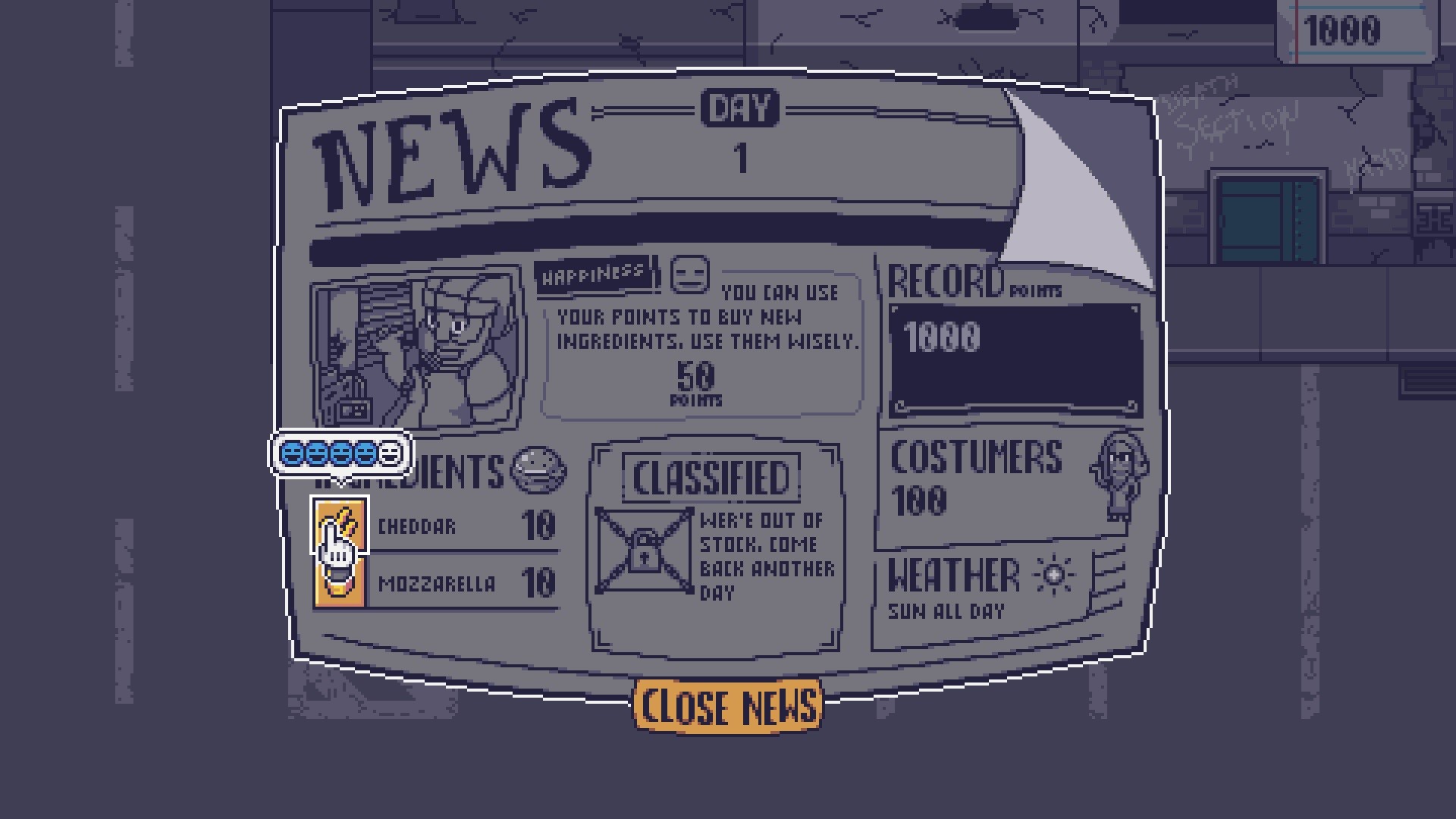 While there are improvements that could be made, it’s a nice game for the $3 asking price. It does what it sets out to do, and does it with a unique art style that personally drawn me to it. So if you’re looking for a difficult, fast paced memory game about making burgers, pick up Make The Burger. Just be warned that it is a difficult game that ramps up as you buy more and continue through the days. It’ll be a good game to pass some time or catch up on some podcasts.