Just say the word Tsumugi and I will elope with you. Right away.

Since the main character can be renamed to whatever you want, I’ll refer her as her canon name, Hibari. You are put into the shoes of Hibari Tojo, who is the only daughter and heiress to one of, if not the, most prestigious family in the area. Due to this, Hibari had to constantly uphold a certain image to keep her family name strong and this took a toll on Hibari as she was growing up. She doesn’t open up to many, in fact she only has two friends at the start of the game and one of them is employed by the Tojo family, and she is very reserved even in private. She does not like those that are only in it because she is a Tojo and she does not tolerate those trying to sugarcoat everything to be on her good side. So she only has her personal butler, Kasuga, who she pretty much grew up with since she arrived at her family’s estate; and Tsumugi, who goes to the same all girls school as her and was the one that pursued the friendship until Hibari cracked and finally opened up. While she does not like her grandfather, she is very content with her current way of living. However, her grandfather and her other family members is going to turn her life upside down sooner than she thinks.

Being the only heiress, one of her duties is to get married. Before the game begins, Hibari was not entertaining anyone that her grandfather put in front of her and rejected them. Except, time has ran out. At the start of a new school year, Hibari is blindsided with a new living situation. Her family members have become impatient and her grandfather thought up a solution to quiet down the family and a way to get Hibari engaged, have her live with four suitors that he picked himself. If Hibari still doesn’t get engaged to one of these four men, well, she’s going to instead marry someone that has been approved by the family whether it’s someone she likes or not. At the beginning, Hibari is confused on why her grandfather picked these four men specifically, especially considering their history. What new experiences will Hibari gain and which suitor will she end up picking at the end?

Despite the first impressions the characters have, I ended up liking all of them (or at least most aspects of them). Hibari, while closed off and does not put her sharp tongue on a lease, she does show that loyalty is an aspect that she puts high and she is annoyed when all that people see is her Tojo name. After all, she doesn’t have many friends (despite arguably being popular in her school) and she had many other butlers or maids before Kasuga came along as she couldn’t trust anyone that treated her differently to get on her good side, while also bad mouthing her when they think she wasn’t listening. As the game goes along, Hibari opens up with the help of her world opening up and you get to see more of her emotions peeking out and see her learning aspects that she never would have learned if she wasn’t forced to live with the four love interests.

Talking about the four love interests featured in Variable Barricade, it’s time to get to them. What I really liked about Variable Barricade is that you’ll pretty much be on the same page as Hibari for most, if not the entirety, of the game. When you first meet them, sure they do look attractive, but they do not give off a good first impression with how they act towards Hibari (like trying to propose to her right when she gets out of school?) and their past does not help them in one bit. Ichiya attempted marriage fraud, Taiga has a gambling addiction, Shion doesn’t do anything and relies on others being charmed by him enough to support him, and Nayuta is a walking debt generator. It also doesn’t help that you have a limited amount of time to choose, fall in love, or just take an arranged marriage. Why would Hibari’s grandfather see them as the best choices for Hibari when any of them would give them bad press? Well… that’s because they too open up and show that they have more to them than they initially show.

Not to get into spoilers, but you soon find that your first impressions of the four love interests aren’t what they fully are and carry some damage. Nayuta might as well be a clueless puppy, who also happens to be super strong, with a kink that calls for Hibari to step on him (weird but okay), but you’ll learn that he’s loyal, has his own moral standards, and why he chose to court you. Plus his relationship with Hibari is cute, despite his cluelessness. Shion is the basic pretty boy that never had to do any work and jumps between patrons that are fine with being paid by having a pretty boy to look at. However, Shion has more in common with Hibari than you would think, his reason for courting Hibari isn’t as you think (though it’s convenient), and he has a dark, nasty side to him. Ichiya is a huge flirt and an amazing cook, but you get to know his family life and how that shaped him as well as how he isn’t as cool and collected as he lets on. However, his last chapter is not it. And last, Taiga who is a cool free spirit that doesn’t hesitate to say what’s on his mind and has a gambling addiction, but he surprisingly has great chemistry with Hibari, you see that he really does care for those around him (and especially the other orphans in his old orphanage), and he does have a layer of kindness hidden underneath.

The game also has an interesting way to show how far you are in the game. All the events that you’ll be going through are arranged on Boards, which look like flowcharts but aren’t really. The Common Route has a Board and each love interest has three. The first Board for each love interest is essentially their Common Route Board, as it’s required to move on in the main Board, and you can choose whose to do first. This brings out the other side to them for Hibari to see and how they aren’t as terrible as you might have expected. Once you do all of them, you can then pick who you’re wanting to get engaged to (or which to go for first). Board 2 is generally where Hibari and the love interest gets to know each other more and have some cute moments, while Board 3 brings in some drama and tests their relationship. Don’t worry though, as you can set the game to automatically continue rather than take a short intermission to the Boards if you prefer that.

In addition, the love interest Boards also have this aspect called Barricade Battle. Hibari isn’t going to fall for these guys easily mainly due to the walls she put up around herself. So unless one of the guys breaks them down, she won’t catch feelings for them. This is visualized through Barricade Battles, which are built up until around the end of the Board where it happens. Each choice in a love interest’s Board will either give a Love Point or a Reason Point. Love Points go to the love interest and will grant them a better sword while Reason Points go to Hibari and will give her better walls to protect her. Unless you’re going through to see all possible endings (which there’s four for each of them), breaking down Hibari’s walls is necessary to getting Hibari together with someone and get the best ending. 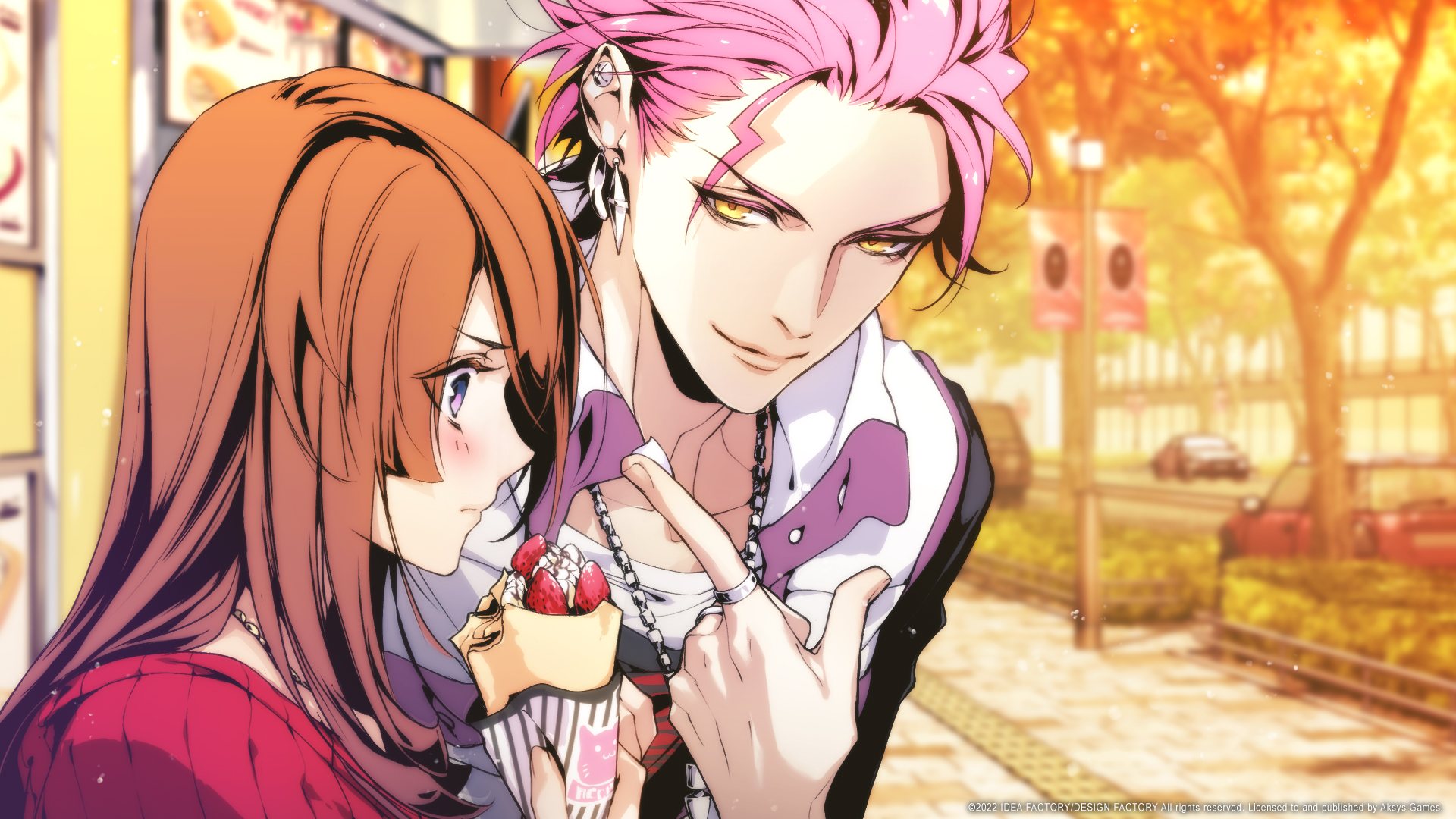 There are even more character interactions that you can read as well. After certain events, Hibari will get WHIS messages (which are basically text messages) from a character regarding what may have happened in that event. There’s also RABI, which you get around halfway through the Common Route Board, which is a way to see how the boys act without Hibari in the room. RABI will wander around the various rooms and when it catches something it will record it for Hibari (and you) to view. These can be quite funny and it is nice to see how they act without trying to get Hibari to choose them. Each love interest also has a After story which gives us a little event to get a peek into their lives after they got engaged. Though, I don’t think we needed events in their Boards recapped here as it’s not necessary to know what they were thinking.

Variable Barricade does suffer from some issues though. Some voiced lines would fluctuate with their volume, when the text size is increase to half the size of the text box it is noticeably blurry (which may be a remnant from it originating on the PSVita), and the text breaks are weirdly placed sometimes. You’ll notice some sentences being cut off, sometimes having you wait for a few seconds for a new screen to pop up, and it always felt like it could have been fitted into one or at least fit the rest of the sentence on the first text box before continue to the next sentence with a new text box. While I do appreciate how the voice lines in the menu are subtitled, I did end up wishing I could disable it due to how it was set up as the text block more times than not blocked what I wanted to read. I also was expecting some more cute moments as Hibari and your chosen love interest being a couple and some of the drama you’ll find in their 2nd and 3rd Board can be a bit drawn out.

At the end of the day, I’d say that I would recommend Variable Barricade to those that like visual novels, and of course especially to fellow otome fans. I really did end up liking the storyline here, I like the twist where the main character doesn’t want to fall in love, I enjoyed the four love interests most of the time, and more importantly I loved Hibari (despite her being a bit of a tsundere) and her friends (like seriously, I want Tsumugi to be datable; I love her). Though, some may want to wait for a discount as the 3rd Boards can feel drawn out, aspects of the love interests’ routes can hit too close too reality, the line breaks in text boxes is weird every so often, and the After scenes are disappointing for what they are. But if you do decide to get it, be ready to set aside a whole week (or more) as you might not want to put it down until you get through every route.